Nike’s Roshe shoes first hit the market in 2012 in a model known initially as the Nike Roshe Run, which meant the company probably intended it to be a running shoe. However, the company later changed the shoe name to Nike Roshe One.

The shoe became a fan favorite as soon as it was released and is now considered a classic.

Nike released a variety of Roshe variants in 85 different styles, versions, and colorways. A big part of the Nike Roshe appeal is its minimalist design and aesthetic simplicity, allowing it to be priced at a relatively modest $70.

Below is a preview of what this article will cover:

The Origin of Nike Roshes

Building on the well-established tradition of Nike of combining fashion and functionality, Nike Roshes introduced a new twist in shoe design: a Zen-like, elegantly simple in design and function sneaker.

The inspiration for the shoe came from Zen Buddhist gardens. The sole is inspired by simple stepping stones, while the insole by a patch of sand.

A key selling point was the breathability of the mesh upper, which permits air to pass through tiny pores of the Nike Roshe material. This keeps the whole foot cooler and drier, providing the wearer more comfort, even during physical exercises.

Nike Roshe incorporates lightweight materials to give you a feeling of lightness and maneuverability while minimizing leg, foot, and ankle weariness.

Reviewers rated the Nike Roshes highly for their comfort and praised them for their ability to fit in the casual and gym wear category, also known to others as athleisure.

The introduction of the Nike Roshe Run was a huge success, especially considering that its release lacked the usual heavy Nike promotional campaigns or even celebrity endorsements. People took to it immediately, making the shoe a popular choice in the sneakerhead community.

Nike Roshe shoes run true to size, making them a hassle-free online purchase. Although it takes one to two days to break in new Nike Roshes, the shoes are very comfortable afterward. You can easily wear the shoes with or without socks.

The phylon midsole makes the Nike Roshe incredibly lightweight. Additionally, the midsole is easily molded and formed into different shapes and thus flexible. The shoes are wonderfully soft, malleable to the feet, and great for walking around in.

That being said, Nike Roshe soles tend to get dirty fast, and for professional runners may not be the most technical athletic sneakers. This probably explains the name change from Nike Roshe Run to Nike Roshe One.

While there is no doubt that Nike Roshe sneakers are comfortable and great for walking, these shoes don’t offer optimum running features. The midsole cushion of the Nike Roshe is pretty dense and non-responsive, so it lacks the spring or bounce needed for a good running shoe.

What changed was the upgrade of the shoe’s materials, as shown below:

Nike Roshe Two sneakers come with a neoprene-like material for improved sturdiness, while maintaining the lightness and breathability that customers loved about the Nike Roshe One.

Unlike Nike Roshe One shoes, whose Nike swoosh came off easily, for the Nike Roshe 2 upgrade, the swoosh is embossed for a cleaner look and as hard-wearing shoe branding.

Another significant difference is that the Roshe Two sneakers have an upgraded tongue for distinctive perforation detailing, that increases foot ventilation for added comfort.

The other significant difference between the two sneakers is the midsole tooling. The Nike Roshe One’s Phylon foam insole was disliked for its minimal cushioning.

However, the Nike Roshe Two addresses this issue comprehensively with an upgraded sole. It features a tri-density sole unit, so has three different layers of Phylon foams for optimum durability, cushioned comfort, and support.

Why You Should Buy Nike Roshe Sneakers

Which Nike Roshe Is Best for You?

In this section, we’ve highlighted a few Nike Roshe designs for your consideration: 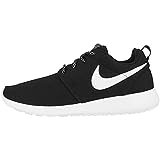 Nike Roshe As a Fashion Statement

Since its release, the Nike Roshe One has joined the pantheon of iconic fashion statements in the highly competitive and flaky sneaker market. As a shoe, it is adaptable and works for a sporty look with jogger pants or leggings and a basic t-shirt or even shirt dresses.

The shoe’s aesthetic sensibilities and minimal profile give it versatility, so that  you can wear it with basically anything and you will express a hint of sporty casual flair.

Are Nike Roshe Sneakers Ideal for Running or Walking?

Nike Roshe shoes are great for long walks and gym use but not suitable for serious running or long jogs.

Do Nike Roshes Clean Up Easily?

Nike Roshe shoes are made from a lightweight fabric that’s effortless to clean and also dries quickly. Even the all-white Nike Roshes are simple to maintain.

If you want to combine style with durability and affordability, Nike Roshe sneakers are perfect. The shoes are super stylish and comfortable, as well as being versatile, everyday footwear at an affordable price.

Combining comfort with a lightweight build and minimalist design sensibilities, Nike Roshe has quickly become a must-have among Nike loyalists and the sneakerhead community.

By most measures, Nike Roche is one of the most comfortable sneakers in the market and is a good shoe for the gym, long walks, or as a fashion accessory.

And if you want a sneaker that fits true to size, Nike Roshe shoes boast a well-constructed design that can stretch and mold to the customer’s feet.

The Best 5 Insoles for High Arches: The Ultimate Buying Guide 2023

What Are The Best Insoles For Work Boots in 2023?

The Best 7 Shoes for Warehouse Pickers 2023